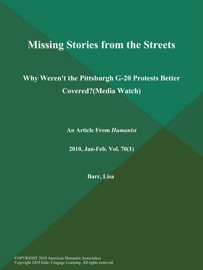 "OVER 4,000 COPS from around the country occupied my hometown, wrote a Pittsburgh native a week after the September G-20 Summit focusing on the global financial and economic crisis was held in the city, along with expected protests. "They brought a lot of expensive and dangerous cop toys ($20 million worth). I knew they'd find some excuse to use them all, and they did." This wasn't CNN doing the expected, necessary follow-up to the September 24 protests, at which one of their crews was exposed to tear gas on a public street. It was folksinger and activist Anne Feeney, who found it "depressing and distressing" to see a city under martial law. Her blog, Fellow Traveler's Advisory, filled in key gaps in the mainstream news coverage, as did that of her touring partner, David Rovics, whose blog is called Songwriter's Notebook. "There is a popular assumption asserted ad nauseam by our leaders in government, by our school textbooks, and by our 'mainstream' media that although many other countries don't have freedom of speech and freedom of assembly--such as Iran or China--we do, and it's what makes us so great," writes Rovics in his September 28 post, "The Police Are Rioting" He goes on to explain that the ACLU had filed lawsuits to force local authorities to grant assembly permits sought by state senators, peace groups, and women's groups months in advance of the summit. "It doesn't say anything about applying for a permit in the First Amendment" states Rovics, "and in many more democratic countries ... no permit is required for citizens to assemble."