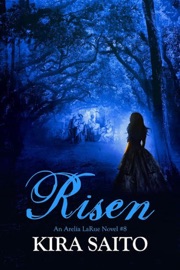 Down in New Orleans, Arelia LaRue’s strange world expands as she goes deep into the heart of the city’s mystical fabric and discovers hidden truth that is stranger than fiction.

Seeking direction from the mysterious secret societies that have guarded New Orleans for centuries, to the spirits that have caused chaos in Africa, Arelia realizes that the war she is immersed in is much bigger and far more deadly than she had imagined.

Her plans for a magnolia scented future with Lucus LaPlante are brought to an abrupt halt as she discovers that fate has vastly different plans for the both of them. Plans that may keep them apart for good. Much to her dismay, Arelia realizes that being a true Queen requires sacrifice even if that means breaking your own heart.

Filled with mystery, action, heartache, betrayal and spirit, Arelia’s strange and haunting world will spirit you away.