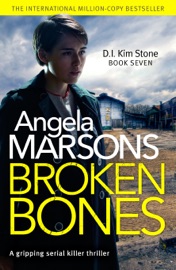 They thought they were safe.  They were wrong.
The murder of a young prostitute and a baby found abandoned on the same winter night signals the start of a disturbing investigation for Detective Kim Stone – one which brings her face to face with someone from her own horrific childhood.
As three more sex workers in the Black Country are murdered in quick succession, each death more violent than the last, Kim and her team realise that the initial killing was no one-off frenzied attack, but a twisted serial killer preying on the vulnerable.
At the same time, the search begins for the desperate woman who left her newborn baby at the station – but what at first looks like a tragic abandonment soon takes an even more sinister turn.
When another young woman goes missing, the two investigations bring the team into a terrifying, hidden world, and a showdown puts Kim’s life at risk as secrets from her own past come to light.
As Kim battles her own demons, can she stop the killer, before another life is lost?
A gripping new crime thriller from the number 1 bestseller – you will be hooked until the final jaw-dropping twist.

Praise for Broken Bones:
‘Angela Marsons has yet again nailed and delivered an outstanding five star read. Broken Bones had me hook, line and sinker until the shocking end. The author certainly knows how to keep me on my toes until delivering a final punch that knocked me well and truly off my feet. Brilliant!’ By the letter Book Reviews
‘Captivating…Angela Marsons yet again drags you into the story and locks you in until the final word. I can honestly say this is my favourite book of the best British Crime Series I think I've ever read! If I could give it 6 stars I would.’ Goodreads reviewer
‘Angela’s books touch on real storylines, and the ones here are both timely, hard-hitting and make for some emotional reading…Once again this is another faultless book from Angela Marsons who I firmly believe is in a league of her own in this genre.’ Book Addict Shaun
‘With an opening that will have you gripped from start to finish, I devoured it in a matter of hours - I simply couldn't put it down… I was literally on the edge of my seat with anticipation wanting to know what was going to happen next.’ Chelle’s Book Reviews
‘Marsons for me is the QUEEN of this genre. She knows how to add the human touch to each story and I just adore her. Bloody FABULOUS.’ Postcard Reviews
‘Angela Marsons is one of the most immensely talented writers out there; she has an exceptional skill in creating a cast of characters and a spider web of plots that will keep you glued to the book until it is finished. I'd strongly advise getting yourself well comfy before you start reading this as you are not going to move until you are done!’ Goodreads reviewer
‘An action-packed page turner with many twists and turns in a plot that is brilliantly written…This is a clever, realistic storyline that sucks you from the very first pages. I would have no hesitation in recommending this series to anyone, the quality of the writing never disappoints. Love it!’ Goodreads reviewer
‘Marsons just gets better and better, her plots are slick, her writing intelligent, and her characters are like family… It's a sign of a phenomenal author to be able to create that connection between reader and character, and Marsons just has it… I cannot praise her writing enough. Broken Bones is utterly amazing. Buy it. Now.’  Emma the Little Book Worm
‘The suspense builds up so fast and I couldn’t wait to get to the end for everything to be revealed… this definitely my favourite book of the series so far!’ Stardust Book reviews
‘Simply brilliant. Firstly, the plot is amazingly good and keeps you hooked from the first page. I really didn’t see the ending coming and really really enjoyed this read…I read it in one day and feel bereft now I’ve finished it.’ Goodreads reviewer
‘Angela Marsons is the only author that I put other books down for, to read hers when they come out. Did it live up to my expectations? Hell Yes!’ Nigel Adams Bookworm
‘Angela Marsons never fails, each one is as good, if not better than the last. I feel like I’m part of the team, totally immersed in the story. Keep it up, I can’t wait for the next one!’ Goodreads reviewer
‘A terrific plot with a real shockeroo of an ending…As always, the pace is fast as lightning, and the short chapters with their mini-cliffhanger endings make it so hard to put the book down… I will read anything and everything written by this author. If you have not started reading this series, you are really missing out.’ Goodreads reviewer
‘Stunningly good are the words that spring to mind after finishing the book. It's dark, it's twisted and I couldn't put it down. I loved it...So when is the next one out? I'm ready!’ Bonnie’s Book Talk
‘Oh my word, she's done it again!!! I was on the edge of my seat reading this book, I loved how each chapter took you in a different direction to the last and often ended in a cliff hanger that made you want to continue to find out what happened next!’ The Introverted Mum
‘The storyline had loads of twists and turns…a real page turner. I couldn’t put it down…I would give this book ten stars if I could.’ Goodreads reviewer
‘Kim Stone is without a doubt my favourite detective series and as soon as I get the latest book it immediately goes to the top of my reading list.’ Goodreads reviewer
‘Angela Marsons can't write a boring chapter if she tried. Her Kim Stone series is one of the best. I had it all worked out...until I realized that I knew nothing. I can't wait for the next one.’ Goodreads reviewer

Praise for Angela Marsons D.I. Kim Stone series:
‘Hooked from the very first page...This is the best book I’ve read, by the best author on the shelves...I really can’t wait for the next one.’ Nigel Adams Book Worm (5 stars)
‘I could not put it down and was hooked in from page one to the very last word ... The plot is stunning. Very clever and very dark…A fantastic crime novel from one of my all-time favourite writers ever.’ Booklover Catlady (5 stars)
‘Gripping. I was captivated from the start, there is just no let-up...I wanted to read at every opportunity, fast-paced and blood pressure raising!...Angie Marsons is definitely one of my favourite authors, I just think the books are fantastic.’ Stef Loz Book Reviews (5 stars)
‘I read it in one gripping sitting as I just couldn't tear myself away...The Kim Stone series is one of the best crime series ever written...an incredibly powerful read, one that drew real emotion from me…There can't be a crime fan left in the world who hasn't discovered this series yet but if there is and you are one of them, go and read them all immediately.’ Book Addict Shaun (5 stars)
‘Read this book now, it is just that amazing...a gripping, unpredictable story...I couldn’t have been more hooked if I tried...some of the most vivid writing I've read, and I was feeling slightly queasy as I was reading as a result...unpredictable and completely absorbing.’ Rachel’s Random Reads (5 stars)
‘Brilliant...a terrifying, nail-biting finale where, once again, Kim proves how far she will go to protect her team. Ms. Stone is fast becoming one of the greats of detective fiction’ Go Buy the Book (5 stars)
‘Addictive...yet ANOTHER cracker to add to an already stunning series. This stomping great read from an exceedingly talented writer will have you furiously flipping the pages.’ Little Bookness Lane (5 stars)
‘My favourite read of the year so far...Wow, totally fantastic, beautifully written, dark, dangerous and emotional. This series gets better with each book, loved it. I give it 6 stars.’ Bonnie’s Book Talk (5 stars)
‘Gripping...the best book in the series yet, and that takes some doing... grips you by the throat and doesn't let you go to the last heart-pumpingchapter...Would I recommend this book? Hell yes.’ The Book Review Café (5 stars)
‘One of the only people to make me cry [Angela Marsons] also takes me right to the edge of my very last nerve. Both from excitement and tension. Every. Flipping. Time. This is not a story for the faint-hearted...Best. One. Ever... (so far ;) ) Dark, troubled and tension-filled 5 stars. Big fat ones. Like, massive.’ Jen Med Book Reviews (5 stars)
‘Terrifying...I was genuinely surprised at the twist!...I stayed up late to finish this book and at the satisfying end, there was the same old question I know all DI Kim Stone fans have . . . when is the next one out??’ K.L. Slater