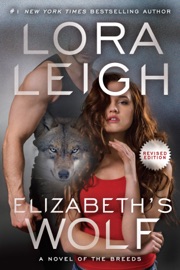 From New York Times bestselling author Lora Leigh comes a new, revised edition of a beloved classic in the passionate Breed series—Elizabeth’s Wolf won the hearts of readers everywhere when it was first released, and now experience the magic again in this special, expanded edition!

Special-Forces solider Dash has all but given up his will to live until an innocent letter from a little girl brings him back to life. Cassie writes to him every week, strengthening his resolve to recover from the devastating loss of his unit. But when the letters suddenly stop arriving, Dash instinctively knows Cassie and her mother are in critical danger.

Elizabeth and her daughter are on the run from a dark and bloody past that refuses to let them go. The stakes are too high for her to fall for this dangerous man who’s just walked into her life, but now more than ever she needs help.

Saving his mate and her daughter calls Dash’s beast to the forefront and transforms the lone wolf into an alpha protector—he becomes Elizabeth’s wolf.